“Where the City Can’t See is the first fiction film shot entirely through laser scanning technology, directed by artist Liam Young and written by author Tim Maughan. Set in the Chinese owned and controlled Detroit Economic Zone (DEZ), in a not-too-distant future where Google maps, urban management systems and CCTV surveillance are not only mapping our cities, but ruling them.

“Exploring the subcultures that could emerge from these new technologies, the film follows a collection of young factory workers across a single night, as they drift through the smart city in a driverless taxi, searching for a place they know exists, but that the map doesn’t show. They are part of an underground community that work on the production lines by day, by night adorn themselves in machine vision camouflage and the tribal masks of anti-facial recognition, enacting their escapist fantasies in the hidden spaces of the city. They hack the city and journey through a network of stealth buildings, ruinous landscapes, ghost architectures, anomalies, glitches and sprites, searching for the wilds beyond the machines…” 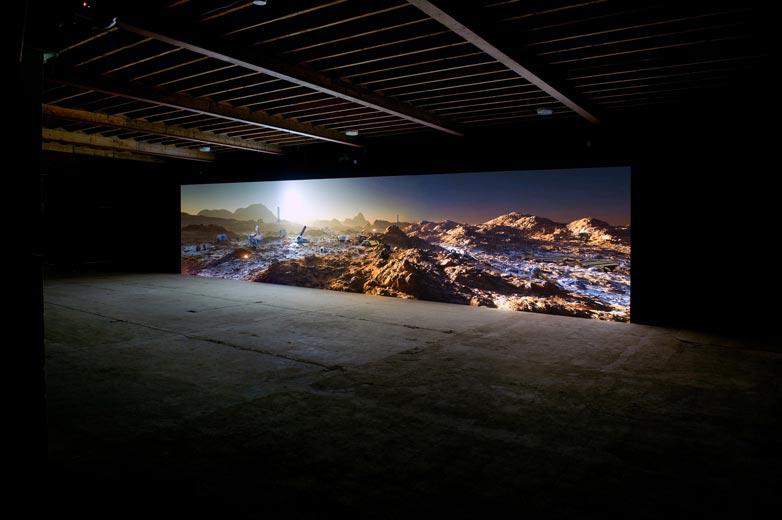 “At Kelly Richardson’s show ‘Legion’ at the NGCA in Sunderland we are presented with a number of major landscape works. Very quickly we become aware that these worlds operate under their own internal logic. For example in works such as ‘Exiles of the Shattered Star’ (2006) meteors fall from the sky like rain. In ‘The Erudition’ (2010) we are presented with a lunar-like landscape; across the terrain holographic trees flicker into and out of life. In this piece time seems to be elastic, the landscape is primordial (as it is elsewhere in the show) but the trees specifically suggest an unrealised future. Is there no such thing as a ‘real’ tree in this world’ Is it impossible to grow here’ If artists are generous in their visions then this is where the facade of Godlikeness will fade. It is the space that they leave for us where we can begin to add our own readings of what is going on. The strength of Richardson’s work is that the reasoning is left up to us….”

“Richardson continues these ideas in her major new commission ‘Mariner 9’ (2012) currently on display at Whitley Bay’s historic Spanish City Dome. This stunning 12 metre-long panoramic installation, depicts a dark vision of Mars. Here we find the landscape littered with the detritus, or more like, the dying, prostate bodies of previous explorer craft, twitching in their last moments of life. Presumably the current probe, ‘Curiosity’ will join this ‘elephants’ graveyard’ of human exploration. Again there is no reason given for the demise of these machines; it is up to us to decide if it was a Martian fight-back or a failed attempted at colonisation of the red planet. In a sense these attempted explorations, the desire to extend human knowledge (and therefore power), are Godlike attempts to capture information – to become all-knowing. But as Kelly suggests in this work, we are not gods; we are human, weak, full of hubris. But here, where the facade and the attempt to control our world falls away, it leaves a space for the unknown or unplanned to emerge.”

Text: James Smith, Mariner 9 and Legion by Kelly Richardson, This Is Tomorrow.

“Twenty million years ago Antarctica was beginning to freeze. We’ve investigated, thought and built speculations. What we believe happened was about like this.

“Something came down out of space, a ship. We saw it there in the blue ice, a thing like a submarine without a conning tower or directive vanes. 280 feet long and 45 feet in diameter at its thickest.

“It came down from space, driven and lifted by forces men haven’t discovered yet, and somehow perhaps something went wrong then it tangled with Earth’s magnetic field. It came south here, out of control probably, circling the magnetic pole. That’s a savage country there, but when Antarctica was still freezing it must have been a thousand times more savage. There must have been blizzard snow, as well as drift, new snow falling as the continent glaciated. The swirl there must have been particularly bad, the wind hurling a solid blanket of white over the lip of that now buried mountain.

“The ship struck solid granite head-on, and cracked up. Not every one of the passengers in it was killed, but the ship must have been ruined, her driving mechanism locked. It tangled with Earth’s field, Norris believes. No thing made by intelligent beings can tangle with the dead immensity of a planet’s natural forces and survive.

“One of its passengers stepped out.”

Video: Deeply Artificial Trees, Vimeo. “areben.com This artwork represents what it would be like for an AI to watch Bob Ross on LSD (once someone invents digital drugs). It shows some of the unreasonable effectiveness and strange inner workings of deep learning systems. The unique characteristics of the human voice are learned and generated as well as hallucinations of a system trying to find images which are not there.”

“Targeting Jupiter’s icy moon, Europa, this expansive sculpture exhibition offers an unprecedented view into Tom Sachs’ extraordinary artistic output and advances his quest to find extraterrestrial life with bricolaged sculptures. The exhibition will fill YBCA with everything his astronauts need to successfully complete their voyage—including the Mobile Quarantine Facility, Mission Control, the Apollo-era Landing Excursion Module (LEM), and special equipment for conducting scientific experiments—immersing the audience in a universe of sculpture occupying the entire downstairs galleries in addition to YBCA’s public spaces. Space Program: Europa will feature live activations of the Europa flight plan by Sachs’ astronauts during the opening and closing weekends. In these demonstrations, the astronauts will showcase the rituals and procedures of their mission, including the cultural export of chanoyu, the ancient art of the tea ceremony.

“Tom Sachs (b. 1966, New York) is a New York–based sculptor known for his work inspired by icons of modernism and design. Using modest studio materials, Sachs creates parallel universes incorporating semi-functional sculpture, sometimes deployed by the artist and his studio assistants for interactive projects, as in Nutsy’s (2001-3) and Space Program (2007 and 2012). YBCA, San Francisco

“Terratic Animism is a project focusing on relationships between animation, animism, technology and how these influence our relationship to our surroundings. The work combines performance with video recordings of explorations of past-Utopian infrastructures in USA, combined with photography and virtual renderings of landscapes. The work was developed with support from MASS MoCA Asset for Artist program and the Danish Arts Council.”