“On July 30, 1971, the Lunar Module touched down on moon’s Hadley-Apennine region, between a meandering gulley and a range of steep mountains. With Al Worden orbiting overhead, Scott and Irwin spent three days on the surface. During that time, Scott toured around in the never-before-used lunar rover; he describes himself as “the first licensed driver on the moon.” 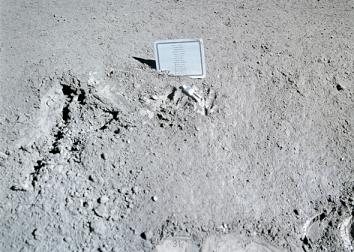 “His time on the surface was nearly finished before Scott managed to squeeze in a brief Fallen Astronaut ceremony. “I was going to drive the rover out, set up a TV camera to watch the liftoff, put down the little astronaut and the plaque, and take a photo,” he says. “On Apollo 15 we took over 1,100 photos on the surface of the moon, and all those are without any rangefinder or light meter. So that was another part of setting up the Fallen Astronaut: making sure I got a good photo of it, because nobody knew about it.”

Finally Scott found his moment, and he wanted to keep it private. Irwin distracted Mission Control in Houston with inane chatter while Scott took a few bounding steps north from the lunar rover and made Fallen Astronaut a citizen of the moon.

“He pulled Fallen Astronaut from his oversize pocket, placed it directly on the moon dust, and nestled the memorial plaque next to it. A spiritual man who keeps his faith private, Scott treated the dedication of Fallen Astronaut as a wordless funeral service. And a short one. “There was a big checklist to take care of first,” he says. “We had to stow all the rock samples and the cell samples, and there’s a lot of procedures you have to go through before you get in and close the hatch for the last time. So it was a brief moment, then Jim [Irwin] said, ‘C’mon, Dave, get back; we gotta load up.’ ”

Text & Pic: The Sculpture On The Moon, Slate.

“Targeting Jupiter’s icy moon, Europa, this expansive sculpture exhibition offers an unprecedented view into Tom Sachs’ extraordinary artistic output and advances his quest to find extraterrestrial life with bricolaged sculptures. The exhibition will fill YBCA with everything his astronauts need to successfully complete their voyage—including the Mobile Quarantine Facility, Mission Control, the Apollo-era Landing Excursion Module (LEM), and special equipment for conducting scientific experiments—immersing the audience in a universe of sculpture occupying the entire downstairs galleries in addition to YBCA’s public spaces. Space Program: Europa will feature live activations of the Europa flight plan by Sachs’ astronauts during the opening and closing weekends. In these demonstrations, the astronauts will showcase the rituals and procedures of their mission, including the cultural export of chanoyu, the ancient art of the tea ceremony.

“Tom Sachs (b. 1966, New York) is a New York–based sculptor known for his work inspired by icons of modernism and design. Using modest studio materials, Sachs creates parallel universes incorporating semi-functional sculpture, sometimes deployed by the artist and his studio assistants for interactive projects, as in Nutsy’s (2001-3) and Space Program (2007 and 2012). YBCA, San Francisco

“Entry to the fabled TriBeCa loft where the artist and musician Rammellzee lived and worked, all but secluding himself in a thicket of cosmic paintings, militarized plastic sculpture and Samurai-like handmade costumes, was like initiation into a secret society in which graffiti, hip-hop, linguistics and science fiction were being fused into a strange new category of art. But Rammellzee opened the doors to this world more and more rarely before he died in 2010 at 49, and even stars tended to be star-struck by an invitation.

“I took George Clinton and Bootsy Collins to the Battle Station for the first time, and they left feeling like they’d just had a close encounter,” said the bassist and music producer Bill Laswell, who met Rammellzee in the early 1980s and remained one of the few people who saw him regularly.

“Soon after the Sept. 11 attacks the building on Laight Street that housed the Battle Station was sold to make way for luxury apartments, and Rammellzee and his wife, Carmela Zagari, were pushed out, relocated to a conventional, smaller place in Battery Park City. Almost 20 years’ worth of his obsessive artwork, enough to fill a large truck, went into a storage locker, where it remained unseen for years, in danger of being forgotten for good.

“But pieces of it are now starting to re-emerge, in a way that Rammellzee most likely would have approved of: in fighter formation. A bunkerlike, black-lighted re-creation of the Battle Station was one of the most talked-about pieces in “Art in the Streets,” a sprawling graffiti survey last year at the Museum of Contemporary Art, Los Angeles, organized by the museum’s director, Jeffrey Deitch, who as a New York dealer had courted Rammellzee for years.

The Suzanne Geiss Company, a new gallery in SoHo, will open its inaugural show by suspending, as if in flight, two complete sets of works that Rammellzee called “letter racers,” spacecraftlike sculptures representing the letters A to Z, built bricolage style from scraps of cast-off consumer goods like flip-flops, sunglasses, toy cars, cheap umbrellas, Bic pens and air-freshener tops.

“Rammellzee – his pharaonic name — which he formulated as a teenager, after leaving home in the projects in Far Rockaway, Queens, and later legally adopted — was not a name at all, he insisted, but a mathematical equation.

“His artwork, though he did show it in galleries, at least in the early years, was artwork only secondarily, he said. Its real purpose was to illustrate a deconstructionist-type dual philosophy, called Gothic Futurism and Ikonoklast Panzerism, that imagined a world in which Roman letters would arm and liberate themselves, at his command, from the power structures of European language. He believed he had inherited his role as a kind of lexical commander in chief from medieval monks, whose literacy in a mostly illiterate world demonstrated the extraordinary power of words to shape reality.

“He felt that even now if you control the language, you control the discourse, you control the power,” said Henry Chalfant, a filmmaker and graffiti scholar who first met Rammellzee at a 1980 exhibition of graffiti work by Lee Quinones and Fred Brathwaite (better known as Fab 5 Freddy) at White Columns gallery in SoHo.

“The letter racers were in his conception totally functional, like models to demonstrate how the letters would work if they were ever to be mechanized and able to fly into battle,” Mr. Chalfant said.

“Rammellzee’s belief that his models could be used as templates for workable military vehicles was so deep, in fact, that he came to fear the government would stop him or forcibly enlist his talents. In his earlier years, though, he had a correspondence with the Defense Department, examples of which he showed Mr. Chalfant.

“In their responses the government thanked him for his proposals, and they said that if they ever needed him, they would get back in touch with him,” Mr. Chalfant said, adding as a swift and perhaps necessary second thought that while Rammellzee always operated “at a remove from present earthly reality,” he never lost touch with that reality. “He always functioned in a very practical way vis-à-vis his career and his work as he saw it. His philosophy was rigorously elaborated. And he worked very hard, right up to the end of his life.”

“Standing in front of the concrete blocks on a warm June morning, I found myself wondering if they were the ruins of a forgotten city – or maybe a fragment of this city’s forgotten history. The fractured masonry corner before me couldn’t truly be a ruin, though. It was perfectly crafted – too perfectly crafted. Its edges were precisely stepped and though it stood in the middle of City Hall Park, no vines or weeds had broken through the flawless mortar. What kind of ruin doesn’t age or weather? Yet there it was, as if it had always been there. In fact, when I looked at it, it seemed as if I couldn’t not remember it being there. But beyond that there was another feeling; something tugging at the edges of my consciousness, challenging me to look closer, to remember something else…”

Text & Image: The Ruins of New York That Wasn’t, Life Without Buildings.

“My relationship to JG Ballard had begun […] with our mutual interest in the work of the US artist Robert Smithson. In 1997, I tried to find Smithson’s famous 1970 earthwork, Spiral Jetty, in the Great Salt Lake of Utah. I had directions faxed to me from the Utah Arts Council, which I supposed had been written by Smithson himself. I only knew what I was looking for from what I could remember of art school lectures: the iconic aerial photograph of the basalt spiral formation unfurling into a lake. In the end, I never found it; it was either submerged at the time, or I wasn’t looking in the right place. But the journey had a marked impact on me, and I made a sound work about my attempt to find it. Ballard must have read about it, because he sent me a short text he had written on Smithson, for an exhibition catalogue…

“It was the writer, curator and artist Jeremy Millar who became convinced Smithson knew of Ballard’s short story, The Voices of Time, before building his jetty. All Smithson’s books had been listed after his death in a plane crash in 1973 – and The Voices of Time was among them. The story ends with the scientist Powers building a cement mandala or “gigantic cipher” in the dried-up bed of a salt lake in a place that feels, by description, to be on the very borders of civilisation: a cosmic clock counting down our human time. It is no surprise that it is a copy of The Voices of Time that lies beneath the hand of the sleeping man on the picnic rug in the opening scenes of Powers of Ten, Charles and Ray Eames’ classic 1977 film about the relative size of things in the universe.

“Smithson understood the prehistory of his site. Beneath the Great Salt Lake was, for some, the centre of an ancient universe, and his jetty could have been an elaborate means to bore down to get to it. As if understanding this, Ballard wrote in the catalogue text: “What cargo might have berthed at the Spiral Jetty?” He elaborated later to me in a letter: “My guess is that the cargo was a clock, of a very special kind. In their way, all clocks are labyrinths, and can be risky to enter.” The two men had a lot in common, and Ballard believed him to be the most important and most mysterious of postwar US artists. My interest in time, cosmic and human, future and past, as well as the analogue spooling of the now, has Ballard at its core…”

Text: Tacita Dean: The cosmic clock with Ballard at its core