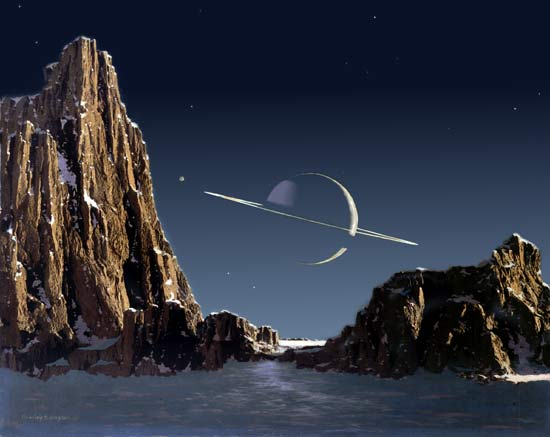 “In the hidden heart of science fiction had always been the hope that the moon and the planets promised some personal adventure akin to [a] sudden encounter with the Pacific – a transitory, enchanted moment when man, like Fitzgerald’s Dutchmen, would hold its breath before the fresh green beast of some radiant new world. At that moment, descending Christlike into time and space, the cosmos would become a place. This was the promise of [Chesley] Bonestell’s beaches – that those peaceful points of light in the night sky were places, that virgin rocks, asleep for a billion years, await my touch no less than the cup that sits before me, that there is a “transcendent mundaneness” abiding in parallel time and space, one that somehow merges the cosmic and the personal. Like the seashore, a Bonestell moonscape is a scared place at the edge of the known world – an altar set before the barrier, a piece of the mundane bathed in oceanic mystery.

“We think of the boundaries of the known, the outer rim of our reality, as somehow harbouring the answers to our “Why” questions. Whether it be Aristotle’s geocentric spheres, Columbus’s ocean-sea, or our own space-time continuum, we conceive of this Larger Context as ultimately separate from an and alien to our everyday experience simply because it is assumed to mask the unknowable, the meaning of all meaning, as inaccessible to us as cosmology to an ant. To encounter the blue skies of Bonestell’s Titan, or to find that the reddish, rock-strewn desert of Mars looks like the American Southwest, suggests that the near edge of the Larger Context is a reality as familiar as my own backyard. Just as the beach is perceived as the edge of infinity out of the abstract and into the realm of direct experience. 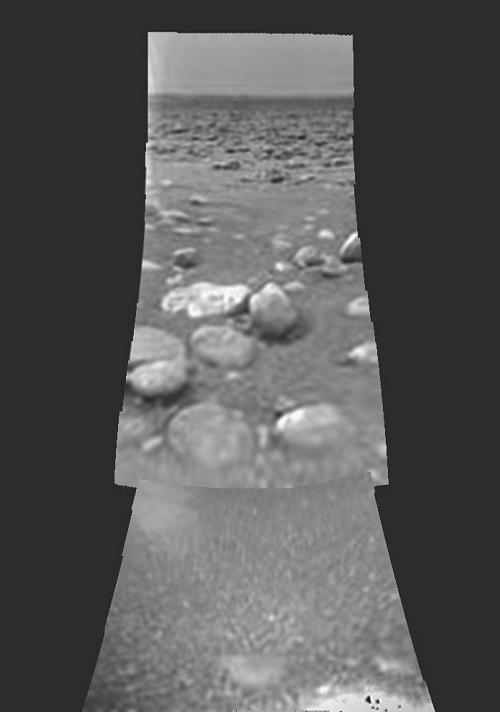 “The two realms, abstract and direct, are quite different. In one, red is a designated wavelength of light; in the other, red is a colour. In one, the earth rotates on its axis and revolves about the sun, in the other, the sun rises and sets. The photographic realism of Bonestell’s cosmic beaches brings the two realms together at the point of tangency, allowing one experience to experience the heliocentric reality from a geocentric perspective, giving the Larger Context a tactile immediacy. The paintings had a disorienting effect similar to seeing the earth from the Moon. Standing there under the blue swirl of of Earth, said the astronauts Gene Cernan, “I had to stop and ask myself, ‘Do you really know where you are in space and time and history?'”. To believe, with one foot in each world, that one can retain an earthly reality yet stand on another ground under another sky, has the transforming impact of an out-of-body experience, or an encounter with a Doppelgänger, a duplicate self.”