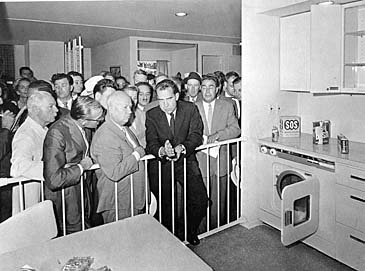 “… [The] more we speak of the future, the more we have need of historical perspective. We have, of course, (always) been here before, given long history of visions of how ‘new’ technologies were going to transform the world. As early as 1893, Answers magazine enthused about how the electrical home of the future would be ‘fitted throughout with … electric stoves in every room [which] can be lighted by pressing a button at the bed-side … [its] doors and windows fitted with electronic fastenings’.’ In the context of contemporary excitements about cyber-shopping, one can readily see the transformative potential in a situation where:

the inhabitant of London could now order … sipping his morning tea in bed, the various products of the whole earth and reasonably expect their delivery upon his doorstep; he could, at the same moment, and by the same means, adventure his wealth in the natural resources and new enterprises of any quarter of the world, and share, without exertion or even trouble, in their prospective fruits and advantages.

However, this is in fact John Maynard Keynes writing in 1900, describing the potential significance of the introduction of the landline telephone as a tool for home shopping and virtual commerce . As long ago as 1909, the Futurist Marinette was convinced that ‘we stand on the last promontory of the centuries! Time and space died yesterday. We already live in the absolute, because we have created eternal, omnipresent speed’. Ten years later, in 1919, Le Corbusier announced that ‘the problem of our epoch is the problem of the electronically mediated home’, and by 1928 Paul Valery was speculating on the possibilities of ‘a company engaged in the home delivery of sensory reality’. In 1959, the designers of the ‘Miracle Kitchen’ which went on show at the American National Exhibition in Moscow promised that ‘household chores in the future will be gone for the American housewife at the touch of a button or the wave of a hand’.

“There is also a long history of visions of how it has been imagined that technical advances in communications — from the telegraph to the telephone to the Internet — will somehow lead to ‘better understanding’. The telegraph — or the ‘Victorian Internet’ , as it has been redescribed by Tom Standage — was heralded as ushering in an era of world peace, for this very reason. In fact, the hysteria, or ‘telegraph fever’, that surrounded the laying of the first transatlantic cable in 1858 surpassed even that surrounding the coming of the Internet today: it was the occasion for 100-gun salutes, celebratory flags were flown from public buildings, bells were rung, and there were fireworks, parades and church services. The whole event took on a religious aura and there were claims that the fact that, as the new invention now allowed people to ‘see and hear everyone else in the world’ , it would somehow lead to a uniting of the human race. Even the august Scientific American referred glowingly to the new invention as an ‘instantaneous highway of thought between the Old and New Worlds’, and there were bold claims that it was now ‘impossible that old prejudices and hostilities should … exist, while such an instrument has been created for the exchange of thought between all the nations of the earth’ .”

Image: Today’s Highlight in History:
Fifty years ago, in 1959, during a visit to Moscow, Vice President Richard Nixon engaged in his famous “Kitchen Debate” with Soviet leader Nikita Khrushchev. (The impromptu exchanges occurred in the kitchen of a model home at the American National Exhibition, with each man arguing for his country’s technological advances.) Nixon and Krushchev defend their systems.