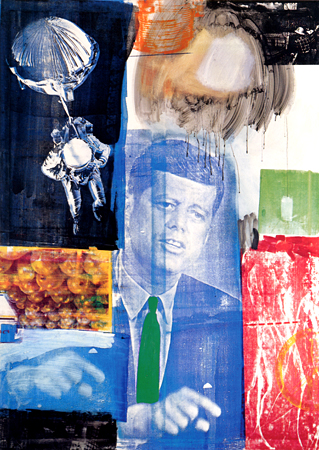 “[The] question that should be haunting science fiction is: why did Ballard get it right, while all of the other science fiction writers were getting it wrong? Why did their apparently logical and well-grounded predictions about ongoing advances further and further into space prove to be so flawed? The standard answer of unrepentant space enthusiasts, as I described it in my Locus Online commentary “Tunnel Vision and the Unfarmed Sky,” is that we “have all been betrayed by a short-sighted public, gutless politicians, inept bureaucrats, and—pace Jerry Pournelle—effete academics” whose obdurate myopia and selfishness prevented humans from easily conquering the universe in the manner envisioned by science fiction; but can anybody really continue to believe that it is all a matter of incompetence and villainy after forty years of a stagnant space program? My answer in that essay, and in an earlier 2003 essay about the Columbia disaster which provoked a bit of controversy, is that humanity to date does not have the technology or the resources to master the unexpectedly difficult and expensive task of conquering space, leading to unwise initiatives like the space shuttle program implicitly inspired by the overly optimistic visions of science fiction. Another answer, which I hope to develop in a forthcoming book about space films, is that the observed realities of space travel—astronauts lumbering about in spacesuits through the unprecedentedly lethal vacuum of outer space or upon equally forbidding planetary surfaces—are simply not appealing to most people, diminishing their inclination to support actual space programs and heightening their interest in the far more conventional, and far more attractive, fantasies of unproblematic space travel without any need for spacesuits, as epitomized by the Star Trek and Star Wars franchises. But here, I wish to explore J. G. Ballard’s own, quite different, answers to this question.

“The implication was that the entire space programme was a symptom of some inner unconscious malaise afflicting mankind, and in particular the Western technocracies, and that the spacecraft and satellites had been launched because their flights satisfied certain buried compulsions and desires.”

The least remarkable answer for the imagined collapse of the space program found in Memories of the Space Age would fall into the category of suspect motives, as first discussed in “A Question of Re-Entry” (1963), which involves a NASA official named Connolly, searching for a downed astronaut in the Amazon jungle, who seeks the assistance of an embittered Westerner living there named Ryker. At one point, Ryker abruptly asks him, “Why did they really send a man to the moon?” When he is met with Connolly’s cautious reply, “Well, I suppose you could say it was the natural spirit of exploration,” “Ryker snorted derisively” and exclaims, “Do you seriously believe that, Lieutenant? The spirit of exploration? My God! What a fantastic idea.” Later, contemplating Ryker’s remarks, Connolly muses, “The implication was that the entire space programme was a symptom of some inner unconscious malaise afflicting mankind, and in particular the Western technocracies, and that the spacecraft and satellites had been launched because their flights satisfied certain buried compulsions and desires.” Ballard says nothing else about this issue, and readers of the time probably imagined he was referring to the obvious fact that the Americans and Russians were venturing into space more as a matter of national pride than because of any genuine interest in exploring unknown realms; thus, once America “won” the space race by landing on the Moon, satisfying this urge to glorify itself, the nation had no further incentive to pursue ambitious space initiatives. However, when he returned in later stories to the questions of why humans had ventured into space, Ballard’s additional explanations of the “unconscious malaise” and “buried compulsions and desires” that had driven people away from Earth, as will be discussed, would prove to be more original, and more provocative…”

The Man Who Didn’t Need to Walk on the Moon: J. G. Ballard and “The Vanished Age of Space” by Gary Westfahl, Internet Review of Science Fiction.