“A cover illustration may be illustrative in two different senses, whether it actually refers to a story or not. It may function as one frame of a film or comic book version of a narrative, iconicizing one instant of one episode in the story. (The story may have to be reconstructed from the illustration itself, or it may be present in a separate, literary form.) On the other hand, it may eliminate the traces from which a narrative may be reconstructed, and may instead provide a statement of some general quality of a story, of the magazine, or of SF and/or fantasy in general. In some degree, all cover illustrations may be read as generic statements at all three levels: (1) as representations of stories either actual or potential; (2) as characterizations of the magazines of which they form a part; and (3) as discourses about the nature of the genre(s) to which they belong…” 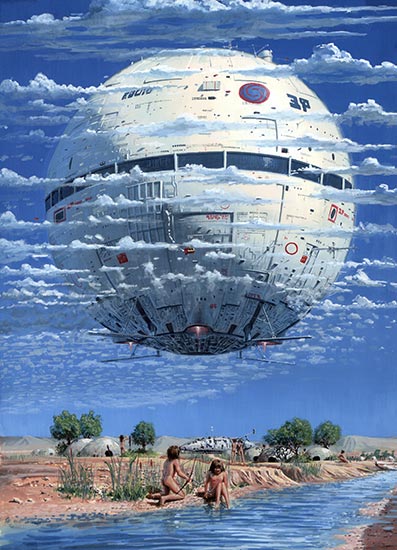 “The mimetic and ideographic principles organize a large lexicon of visual images into orderly structures. […] An examination of a single image in a number of different textual associations with other images will disclose the outlines of the code’s intertextual semantics. The rocketship, one of the most prominent images of estrangement in the specifically S-F illustration code, provides a good example. It has two easily available abstract significations based on two different aspects of its iconic form. John Huntington has phrased one of them in a distinction between fantasy and SF: “The difference between a spaceship and a flying carpet is not that we really understand one better than the other, but that the spaceship signifies a world of science.” It is, metonymically, by causal contiguity, a sign of technology, which is itself a metonym of science, and it must therefore be differentiated from the signs of magic. The spaceship may, however, take two main forms in the illustration code of the 1950s and 1960s: it may have a round, flying-saucer shape orit may be an elongated rocket. The former is feminine in signification, while the latter is masculine, phallic; and these meanings are established by resemblance…”