“Everything is an interactive experience where everything you see is a thing you can be, from animals to planets to galaxies and beyond. Travel between outer and inner space, and explore a vast, interconnected universe of things without enforced goals, scores, or tasks to complete. Everything is a procedural, AI-driven simulation of the systems of nature, seen from the points of view of everything in the Universe.Learn to change what you are to create worlds within worlds within worlds, or let go any time to allow Everything to take over and produce a never ending documentary about the world you live in.”

“We were in a lounge on the second floor of the renovated studio; concept art hung beside a whiteboard covered with Post-its. The furniture was bright, simple, IKEA. Sitting in front of a flat-screen TV the size of a Hummer windshield, Murray loaded up a demo of the game that he had created for E3: a solar system of six planets. Hoping to preserve a sense of discovery in the game, he has been elusive about how it will play, but he has shared some details. Every player will begin on a randomly chosen planet at the outer perimeter of a galaxy. The goal is to head toward the center, to uncover a fundamental mystery, but how players do that, or even whether they choose to do so, is open to them. People can mine, trade, fight, or merely explore. As planets are discovered, information about them (including the names of their discoverers) is loaded onto a galactic map that is updated through the Internet. But, because of the game’s near-limitless proportions, players will rarely encounter one another by chance. As they move toward the center, the game will get harder, and the worlds—the terrain, the fauna and flora—will become more alien, more surreal…” 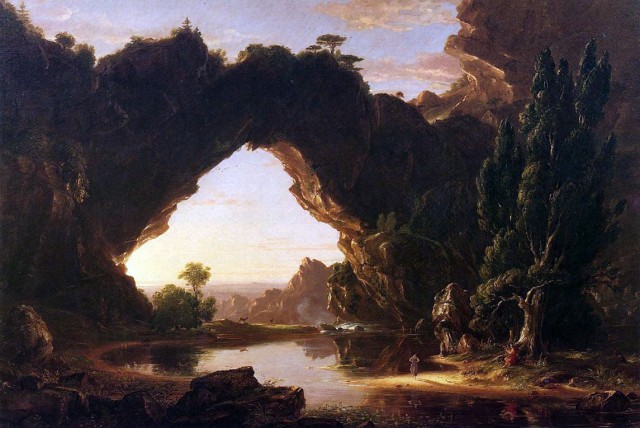 “Each planet had a distinct biome. On one, we encountered a friendly-looking piscine-cetacean hybrid with a bulbous head. (Even aggressive creatures in the game do not look grotesque.) In another, granular soil the color of baked salt was embedded with red coral; a planet hung in the sky, and a hovering robot traversed the horizon. “Those are drones,” Murray said. “They will attack you if they find you killing animals or illegally mining resources.” On a grassy planet, doe-eyed antelope with zebra legs grazed around us. Mist rose off the grass as I headed down a ravine shaded by trees. “This is a place where no one has been before,” Murray said. The biome was Earth-like in light and in color, naturalistic. As I descended, the ravine deepened until rock façades took shape on either side. In spite of the work’s semi-finished state, the world was absorbing. “I’m sorry there’s no game-play element on this planet yet,” Murray said. His mind turned from the screen in front of us—the six planets, tidily assembled for the demo—to the full version of No Man’s Sky on the operating table on the studio’s first floor, below us. Until many improvements were fully realized, the whole of it would inevitably look worse than what we were seeing. “You can lose sight that it once looked like this,” he said.”