“Both reverberation and echo are reflected sound. Echo occurs when a Sound is reflected in such a way that the source sound is distinctly reproduced, as when a shout bounces off a distant, relatively flat wall, for instance. Echo might be single or multiple, depending on how many times the sound bounces. Reverberation, on the other hand, occurs when sound is reflected either so many times that no single, discontinuous repeat of the source sound is heard, or when the reflective surfaces are too near the listener to allow subjective aural separation (as in, say, a tiled bathroom).

“Reverberation does much to define what we perceive as timbre, volume and sound coloration, and largely determines our perceptions of how particular sounds are located, whether they are near or far. If all real-world sounds were to be somehow stripped of their cloaking of reverberation, it would be a wholly disorienting, dead, almost spaceless and depthless world. Lower amplitude reverberation though, like much of the totality that composes “hearing,” is something of which we are frequently not conscious, however much it may affect our subjective experiencing of place and space.’ [1] 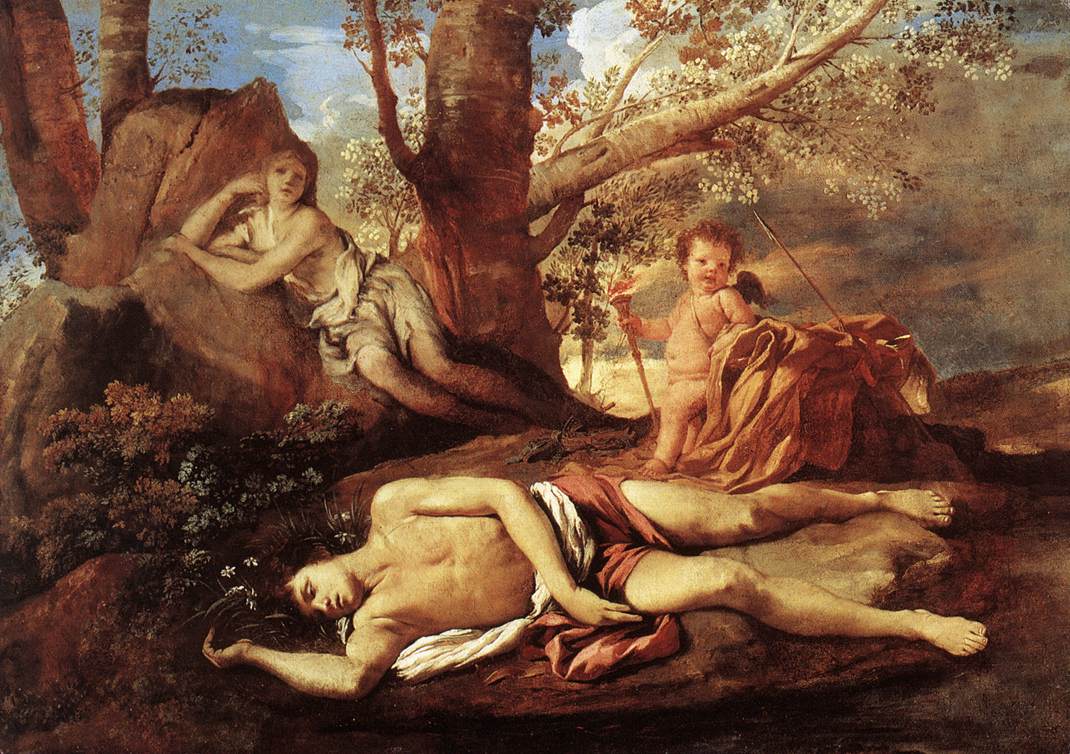 “Echo appears as a minor but significant character in Greco-Roman mythology, sometimes as a daughter of the earth goddess Gaia. In Ovid’s account, Echo is a beautiful nymph, fond of woods and sports, and a favorite of Diana. She is, however, inclined to ceaseless chatter and always seeks to have the last word in any exchange. Zeus (or, romanized, Jupiter) has Echo detain his wife Hera (Juno) in ceaseless small talk, while he adulterously cavorts with nymphs. Hera comes to suspect Echo’s role in the deception and decrees that the nymph may henceforth speak only when spoken to, and then may only repeat the last few syllables uttered to her by others.

“Later Echo observes and falls in love with the beautiful and vain Narcissus, and follows his footsteps, longing to address him, but is obliged to wait until he chooses to address her. He eventually calls on her to show herself, but when she does he spurns her. Heartbroken, she hides herself away in the recesses of the woods, living in caves and among mountain cliffs. Over time her flesh wastes away, her bones change into rocks until nothing is left of her but her voice. She remains however ever ready to reply to anyone who calls her. Narcissus goes on to the reflexive exploits for which he is better known. His record of overweening self-regard, however, is first evidenced in his encounter with Echo.”

“The Ovidian version of the myth suggests a fundamental dualism: by the end of the story the human self, the masculine Narcissus, is alienated from his complement, the female Echo. As a result of this neglect, Echo is subject to a kind of atrophy. The remnants of her existence are eventually displaced into the landscape. All that remains is the residual aural effect (although Echo is still sentient). Echo and Narcissus are both losers here. The underlying thematics are of splitting, of reduction, of loss of the self. The Echo and Narcissus myth is in some ways a “fall” story, although, unlike other golden age narratives, Narcissus and Echo never enjoy a prior state of wholeness from which they fall. What is lost is the chance of wholeness, rather than the actuality. Recalling the notion of participation […] while the myth of Echo and Narcissus speaks of the alienation of the physical world from the human subject, it also signals a residual participatory possibility. Full participation may no longer be possible; we cannot, like the Bororo (as cited in Keil 1994) be parakeets. But a potential participatory nexus remains; Echo waits to answer any who may call her. A limited reunification with nature is possible, but only in the sonic realm.’

“Other accounts place Echo as the focus of violent and traumatic events. Earlier Greek versions, for example, have Echo as a musically inclined nymph who inhabits deep woods. Although very beautiful, she denies the love of any man or immortal, thus attracting the resentment of many. The god Pan, a rejected suitor, has the shepherds (his followers) tear Echo’s body to pieces and then scatter the remains far and wide. Gala, the earth goddess receives the pieces into her bosom, and retains Echo’s voice and talents for answering and imitating sounds and voices)]. In yet another telling, Pan strikes Echo dumb, save for the power to repeat utterances. The shepherds become infuriated by this habit of hers and eventually tear her to pieces of their own volition.

“In one western Australian Aboriginal account, echo is personified as a malevolent child-stealing personage named Balyet (alternatively named Marali). Originally a beautiful girl, whose beauty caused two blood brothers to fight to the death, Balyet has been made a complete outcast, so much so that not even death will accept her. Like the Greco-Roman Echo figures, Balyet’s body wastes away over time (although she remains technically a living woman and not a ghost). She haunts high rocky gullies, visible only at night, and then only as a mist. Lonely and painfully childless, she calls to children, seeking to lure them away from their homes. Those who respond are led away from family, and taken in Balyet’s cold, killing embrace. When Balyet realizes the child is dead, she retreats screaming into the mountain sullies. Those children who manage to escape usually become ill and die. Young girls are especially at risk from Balyet. Whereas Greco-Roman Echo is very much a secondary character, sentient but incapable of initiating dialogue, Balyet retains autonomy. Even in her final reduced form she initiates action, albeit action antagonistic to humans.” [2]