“A huge manmade mountain measuring 420 meters long, 270 meters wide, 38 meters high and elliptical in shape was planted with eleven thousand trees by eleven thousand people from all over the world at the Pinziö gravel pits near Ylöjärvi, Finland, as part of a massive earthwork and land reclamation project by environmental artist Agnes Denes. The project was officially announced by the Finnish government at the Earth Summit in Rio de Janeiro on Earth Environment Day, June 5, 1992, as Finland’s contribution to help alleviate the world’s ecological stress. Sponsored by the United Nations Environment Program and the Finnish Ministry of the Environment, Tree Mountain is protected land to be maintained for four centuries, eventually creating a virgin forest. The trees are planted in an intricate mathematical pattern derived from a combination of the golden section and the pineapple/sunflower system designed by the artist. Even though infinitely more complex, it is reminiscent of ancient earth patterns. 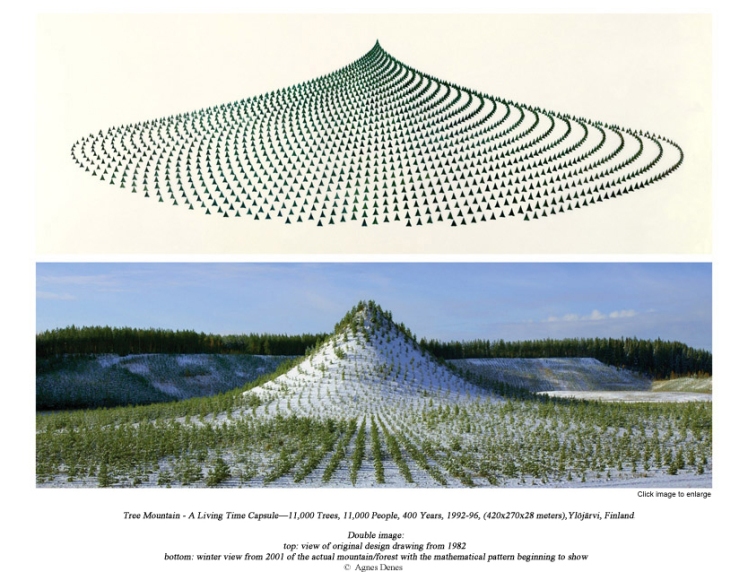 “Tree Mountain is the largest monument on earth that is international in scope, unparalleled in duration, and not dedicated to the human ego, but to benefit future generations with a meaningful legacy. People who planted the trees received certificates acknowledging them as custodians of the trees. The certificate is an inheritable document valid for twenty or more generations in the future – the first such document involving the future in human history. The project is innovative nationally and worldwide—the first such document in human history. This is the very first time in Finland and among the first ones in the world when an artist restores environmental damage with ecological art planned for this and future generations.

“Tree Mountain, conceived in 1982, affirms humanity’s commitment to the future well being of ecological, social and cultural life on the planet. It is designed to unite the human intellect with the majesty of nature. Tree Mountain was dedicated in June, 1996 by the President of Finland, other heads of state, and people from everywhere.”

“The development of Tree Mountain took 14 years from the original design concept in 1982, to its commissioning by the Finnish government at the Earth Summit in Rio de Janeiro in 1992— to its completion in 1996 in middle Finland. A mountain needed to be built to design specifications, which by itself took over four years and was the restitution work of a mine that had destroyed the land through resource extraction. The process of bioremediation restores the land from resource extraction use to one in harmony with nature, in this case, the creation of a virgin forest. The planting of trees holds the land from erosion, enhances oxygen production and provides home for wildlife. This takes time and it is one of the reasons why Tree Mountain must remain undisturbed for centuries. The certificate the planters received are numbered and reach 400 years into the future as it takes that long for the ecosystem to establish itself. It is an inheritable document that connects the eleven thousand planters and their descendents reaching into millions, connected by their trees. This family is the original green generation, the term that became so popular recently in people’s terminology. This family from around the world are proud custodians of the trees that bear their names and grow through the centuries to a lush manmade virgin forest. Tree Mountain is a collaborative work, from its intricate landscaping and forestry to the funding and contractual agreements for its strange, unheard-of land-use of four centuries. The collaboration expands as eleven thousand people come together to plant the trees that bear their names and remain their property through succeeding generations. The trees can change ownership—people can leave their tree to their heirs, or transfer it by other means, even be buried under it—but Tree Mountain itself can never be owned or sold, nor can the trees be moved from the forest. The trees are made by nature, the mathematical positioning created by the human intellect to form a true alliance of man and nature.”