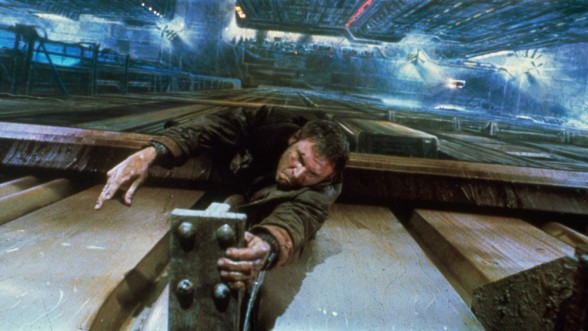 “The figure of the detective is indeed a metaphor when viewed in a certain way, but consider how complex this idea of character, setting, theme and metaphor becomes when it is suggested that the detective isn’t actually human; Rick Deckard (Harrison Ford) in Ridley Scott’s Blade Runner 1982 journeys through a future city in search of replicants, five genetically engineered and lab-created super-humans who have illegally returned to Earth in search of their creator. What is apparent in Blade Runner is that this series of narrative metaphors play out in a setting that is itself another kind of metaphor. Could the Los Angeles as it’s depicted in Blade Runner actually exist one day? Perhaps, but when one considers the figure of Deckard without the setting of the film, the narrative of Blade Runner would mean something quite different.”

“This mix of larger narrative metaphor and setting in SF realigns narrative framing into something both familiar and exotic. In Sets In Motion: Art Direction and Film Narrative, Charles and Mirella Affron argue that science fiction cinema is “…posited on the tension between character — the fate of individuals, space ship crews, whole populations — and environments. Science fiction narratives must, of necessity, foreground their decors. Whether dystopic or utopic, science fiction tests the values of contemporary society by altering relationships between human beings and their environments.”

“The setting of Blade Runner, for example, is a restatement of the classic SF future cityscape trope that illustrates the difference between our time and then, placing the audience into the future, the specifics of place and time re-imagined as familiar but crucially different. Elements of Blade Runner echo Fritz Lang’s Metropolis 1927 – the massive buildings, flying machines coursing between the city’s towers, the stratified social order of its society, from the aristocratic wealthy living in penthouses down to street level or lower where workers and the unemployed jostle for space. Blade Runner overlaid this familiar SF setting with elements of another kind of exotica, the languages and signage of Asia, a conflation of an optimistic future of interstellar travel, genetic engineering, memory implants and corporate domination, with the dystopic grime of decaying post colonialism, a future where the certainty of Anglo-American dominance had been superseded and a time when the hope of leaving Earth was a “chance begin again in a golden land of opportunity and adventure.”

Blade Runner has of course been a hugely influential film, not just as one of the more successful adaptations of stories by Philip K Dick and his trademark narrative themes of estrangement and identity, which in turn spawned a litany of adaptations of Dick’s short stories, but also as a benchmark film in its imagining of a future world and of future cities in particular. Blade Runner was also a cinematic forerunner of cyberpunk, a subgenre of science fiction that emerged in the mid-1980s which had a long wave effect on numerous films and TV programs from Wild Palms (Kathryn Bigelow, Keith Gordon et al, 1993) to Johnny Mnemonic (Robert Longo, 1995). The template of cinematic cyberpunk was a melange of tropes, the all powerful corporation, the hacker resistance, the meeting of technology and human consciousness to name just the three of its most prominent features.

Andrew Frost, “You Are There”, 21st Century Blog: Art in The First Decade, Queensland Art Gallery/Gallery of Modern Art.