“The Voyage of Life was “modern” in its own way: in particular, that it had enough in common with cinema to be considered, if not pre-cinematic, at least proto-cinematic. Thomas Cole’s images had width-to-height dimensions not so different from the 16mm films I was presenting in my film classes; and like most commercial films, they focused on the development of a single character. 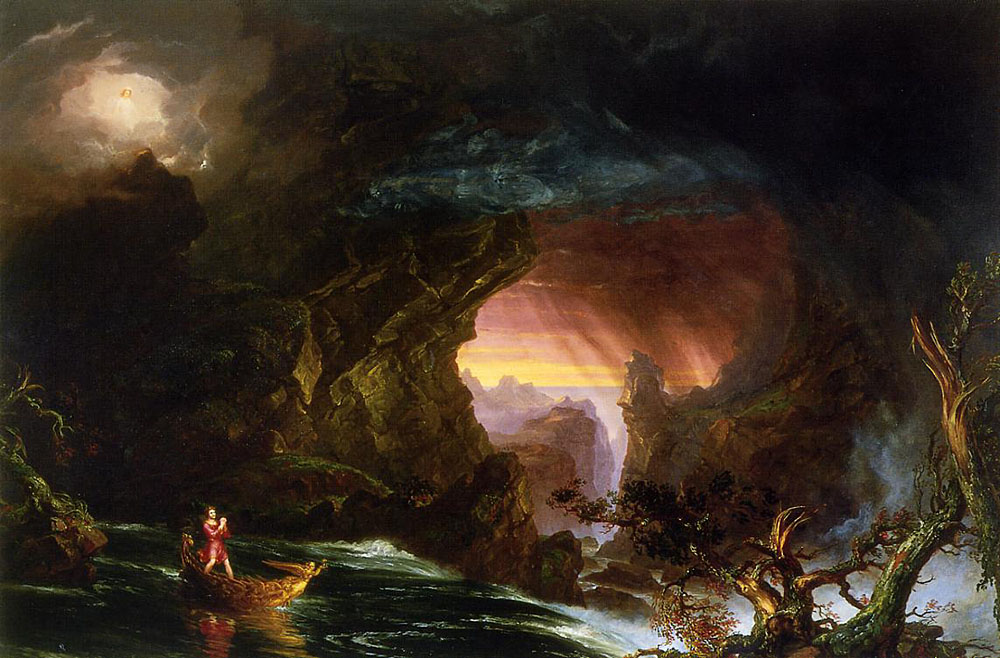 “At first, it seemed a stretch to see Cole’s paintings as cinematic in any but the most general sense, if only because his four compositions are presented in extreme “long shot” (a function of Cole’s interest in seeing human development as part of Nature’s divinely instituted grand scheme), a far cry from the modern commercial cinema’s usual articulation of long shots, medium shots, and close-ups. As I watched students engage The Voyage of Life, however, I realized that those willing to engage individual images of The Voyage of Life and their relationships to each other inevitably developed an experiential process analogous to what modern film directors achieve through editing: that is, most viewers see each of the sections in an “establishing shot” and then move in to make their own “medium shots” and “close-ups.”

“Of course, what viewers discover as they explore the individual paintings is that Cole’s articulation of the particular qualities that define each individual stage of human life make sense only in juxtaposition with the qualities defined in the other three paintings. As a result, many viewers move back and forth from one painting to another–creating their own intercutting between the four stages of life. Further, Cole’s decision to use four successive paintings with considerable time gaps between the stages of life depicted is analogous to the way in which film editing condenses time as a means of generating storytelling energy…”