“In 1934, the architect Albert Speer proposed “A Theory of Ruin Value”, on which Ruskin’s hopes and Hitler’s dreams could be based. Speer explained this theory in his memoirs:

“The idea was that buildings of modern construction were poorly suited to form that ‘bridge of tradition’ to future generations which Hitler was calling for. It was hard to imagine that rusting heaps of rubble could communicate these heroic inspirations which Hitler admired in the monuments of the past. My ‘theory’ was intended to deal with this dilemma. By using special materials and by applying certain principles of statics, we should be able to build structures which even in a state of decay, after hundreds or (such were our reckonings) thousands of years would more or less resemble Roman models. To illustrate my ideas I had a romantic drawing prepared. It showed what the reviewing stand on the Zeppelin Field would look like after generations of neglect, overgrown with ivy, its columns fallen, the walls crumbling here and there, but the outlines still clearly recognizable. In Hitler’s entourage this drawing was regarded as blasphemous. That I could even conceive of a period of decline for the newly founded Reich destined to last a thousand years seemed outrageous to many of Hitler’s closest followers. But he himself accepted my ideas as logical and illuminating. He gave orders that in the future the important buildings of his Reich were to be erected in keeping with the principles of this ‘law of ruins’.” [1] 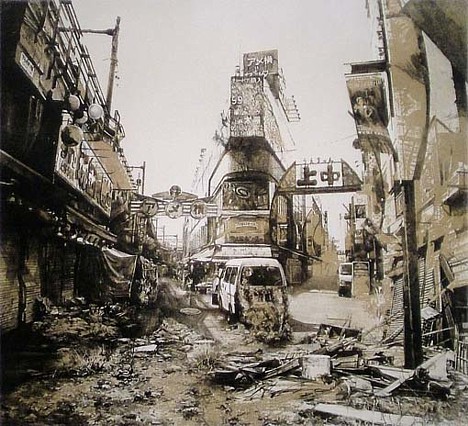 “What Speer and Hitler proposed was to build monumental architecture in the present in a way so that the ruins of those buildings in a thousand or more years time would still be impressive and speak favourably about the time when they were built. Unlike the motivation behind the building of the pyramids in ancient Egypt, it was not the preservation of monuments that was the ultimate aim of the builders, but their controlled decay. Whereas the architects of landscape parks of the 18th and 19th centuries built new ruins, those of Hitler’s Germany were asked to build new monuments which would, over the course of thousands of years, mutate into appealing ruins by themselves.

Although “it is probably impossible to build so as entirely to avoid the ultimate effects of pleasing decay”, the ‘theory of ruin-value’ requires that the aura and aesthetic appeal of the ruined building in the future would already be present in the mind of its architect. The prospective memory implied in such reasoning takes into account natural decay and cultural ignorance over very long time periods. Hitler and Speer drew the inspiration for the ‘theory of ruin-value’ mainly from the impressive ruins of Classical Antiquity in Greece and Italy. But as Speer’s colleague Friedrich Tamms knew, prehistoric megaliths are potentially no less admirable ruins. Applying the ‘theory of ruin-value’ to the origins of megaliths, it is an interesting thought to imagine that they, too, were built with a similar prospective memory. The builders of megaliths may have anticipated the natural and cultural forces which they would be exposed to in the centuries and millennia of their ‘life-histories’. Those megaliths which survived until the present-day have often lost their earthen body as well as much of their precious and sacred content; they are partly overgrown and their stone surfaces are weathered. But megaliths have also become striking monuments with a patina and a strong aura emanating from them. Friedrich Tamms argued that an incomplete and therefore unused building can be particular impressive, because any practical use of it stands in the way of an appreciation of its pure form.” [2]