Some months back we posted an image by Ross Racine. After the artist got in touch to ask us to let readers know that he has new work available on his web site, we asked if he’d agree to a short email interview. Conducted over the last month or so, Ross offered some insights into his work:

Science Fictional: You’ve spoken before on the method you use to make your images, but could you briefly explain your combination of techniques?

Ross Racine: The note on my technical process, available on my site, gives an overview of how I proceed. In a nutshell, the process involves creating the artwork in two steps: the first and main one is drawing freehand directly with the computer, and the second one is printing the image on paper with an inkjet printer. The drawing phase involves working with Photoshop with a pen and a tablet, aside from some preparatory work in Illustrator. In Photoshop, I start from a blank ground and build up the image with a small set of basic tools, such as selection, painting and cloning tools, copying and pasting, layers, luminosity and contrast controls, grain and smoothness modifications, and automation. In short, the process is a combination of digitally drawn material and various transformations done to this material. 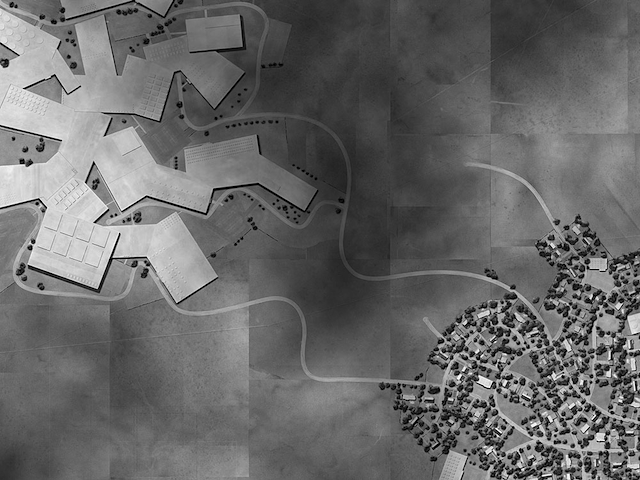 RR: One of the main properties of digital drawing is a virtual, non-material working environment. The fact that the image is not bound to a physical base has several advantages. It allows various combinations of techniques and treatments, an ease in modifying the whole image at once, an ease in copying and cutting, moving and pasting parts of the work (within an image as well as between images), the blending of layers of variable translucency, and the creation of copies of the image in progress (to save steps in the generation of the work and to create different versions of a work). Working in the virtual world also means the image can be altered at any time, even after a final version is established, thus creating a new, different image from a “final” one. Another property of the medium is its very fast speed compared to most physical media. This allows a very short delay between intention and result, as little time is needed to try out various ideas.

SF: The result of your approach creates pictures that land somewhere between photography and drawing, and they have an almost hyper-real quality to them – is your intention that the viewer respond in a particular way?

RR: With the medium of digital drawing and my rather realistic treatment of the subject, my aim is to work in the gaps between photography and traditional, physical drawing. I am aware that many people who happen upon my prints think that they are photos, at least initially. Digital drawing is a relatively new medium among more established visual art mediums. There are few precedents to act as visual references to help viewers approach this type of drawing. But hopefully, a tradition will gradually emerge to make viewers, including myself, more familiar with this new domain of imagery. A precedent can be found in the last two decades in photography (in art, design, and other fields), as viewers have come to expect a measure of manipulation in any photograph, whether this manipulation is apparent or not, ranging from obvious color and shape distortion to very subtle and invisible detail correction. Viewers in front of the actual prints of my work (24 x 32″) are less likely to consider them photographs, as the drawing-like detail on the surface is more visible.

SF: The aerial view perspectives of your images suggest a disconnected point of view, one that isn’t necessarily experienced by many people, but are familiar from satellite imagery, weather maps, surveillance images – and seems to suggest a very eerie feeling of being watched, or targeted – is there an intention an explicit criticism of suburbia, of expansion in your work?

RR: I value the distant, aerial point of view as promoting an attitude of reflection about the world. The public in general has, in the last decade or so, experienced an increased familiarity with the aerial viewpoint, with the instant availability of satellite imagery on the Web. This type of image is quickly becoming as ubiquitous in daily experience as the map. The feeling of “being watched” you mention is not my intention, but nevertheless interesting. It depends on how much you identify with the residents of my suburbs. On the other hand, I acknowledge a feeling of “watching”, as the viewer of my prints is in the position of the all-seeing observer. The watcher knows some things that the inhabitants of these subdivisions do not. My viewpoint is also that of the planner: the all-over, top-down approach of the decision maker. There is an obvious criticism of suburbia in my images, mainly through the exaggeration of certain of its characteristics. The suburbs are the fastest growing part of the urban environment in the majority of nations. But beyond the suburban example, these digital drawings are a way of thinking about design, the city and society as a whole. I would like my prints to remain as open as possible, to be triggers for reflection through analogy with various aspects of the world.

SF: The way you use the imagery of suburbia seems to imply visual conundrums – it feels as if you’re being pulled into the detail of the work trying to sort out individual houses, drive ways… What’s happening there?

RR: I think the conundrum is due to the small size of the jpgs available on the Web. When in front of an actual 24 x 32″ print, the viewer has the liberty to look at it from a certain distance to take in the overall composition and then to come nearer to examine the details within each “property”, making the experience a more intimate one, almost like eavesdropping. 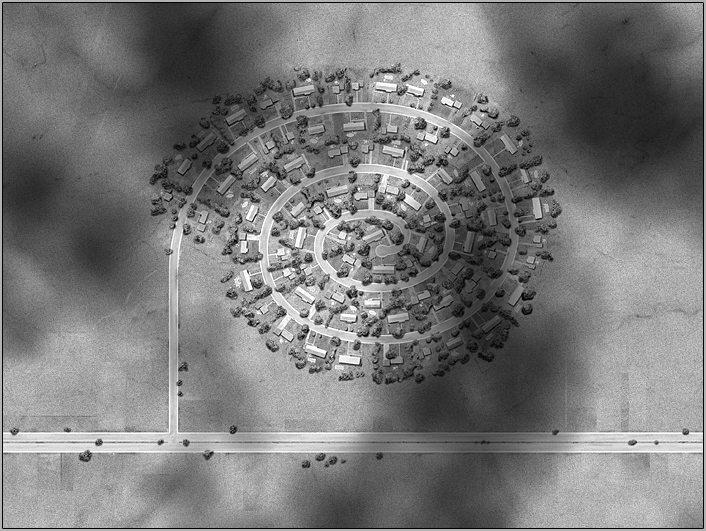 SF: By conundrum, I was suggesting that certain of your images, say for example the views of the housing estates as circles, some like question marks, many of them isolated like desert communities or clustered together in what appears to be empty space, have a very interesting visual play, like an Escher drawing or a jigsaw – were these the kinds of references you were looking at when began to create these drawings? Or was there some other inspiration?

RR: I am inspired by diagrams, by the means by which information can be represented in visual form. The vocabulary of diagrams can be very straightforward and powerful. I use it for composition and also to imply that the suburbs’ contents (material and human), seen from a high aerial viewpoint, may be also considered information. The word I use for my application of the idea of the diagram is structure.

A related concern is the conflation of the macroscopic and microscopic scales suggested by the concept of structure. The observable world has many examples of organizations that are similar at both scales, for example the concentric structure. I am also interested in the implications of living within a specific structure, for example the experience of living in an endless accumulation of haphazardly connected streets.

SF: The images imply a science fictional formulation of suburbia. Do you imagine that there is a particular scenario going on in these places?

RR: I am definitely open to a science fictional reading of my images and I leave the viewer to imagine possible narratives for an image, if a person is so inclined, but I wouldn’t encourage the formation of definite scenarios. This would limit the evocative potential of the image. After all, my prints remain first and foremost images, not descriptions of established stories.

3 thoughts on “Beyond the edge”

Leave a Reply to Any Cancel reply